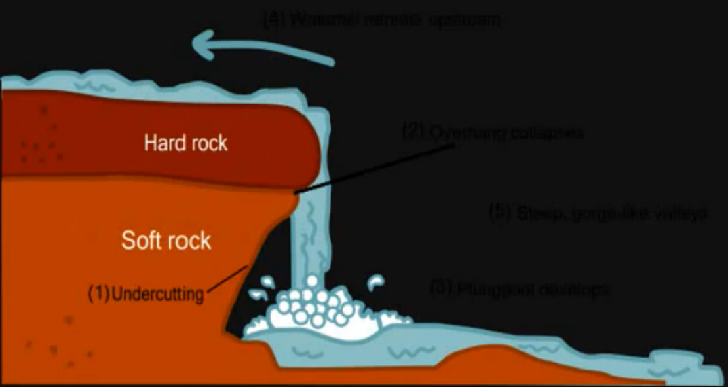 A waterfall is a site where river or stream meets softer rock after flowing over an place of resistant hard rock and water flows over a vertical drop in the course of a stream or river. Waterfalls can also be seen where melt water drops over the corners of a tabular iceberg or ice shelf.

How Waterfall is Formed

A waterfall is made up of two types of rock.Hard rock on the top and soft rock on the bottom.The water erodes the less resistant rock(the soft rock) quicker then the less resistant rock(the hard rock)When the water reaches the soft rock starts to wear the rock away. This creates a clith over the vertical drop the water that plunges down onto the river bed erodes the bed creating a plunge pool.The hard rock creates an overhang this eventually becomes weak and breaks of and the processes began again.

Name and Location of Top Ten Highest Waterfall of the World


Question: Where are the highest waterfall of world located ?
Angel Falls

Angel Falls is the world’s highest uninterrupted waterfall in Venezuela, with a height of 979 m (3,212 ft) and a plunge of 807 m (2,648 ft). The waterfall drops over the edge of the Auyantepui mountain in the Canaima National Park in the Gran Sabana region of Bolívar State.

Tugela Falls is the second world highest waterfall in South Africa, with height of 948 m (3,110 ft).The waterfall drops over the edge of the Drakensberg (Dragon’s Mountains) in the Royal Natal National Park in KwaZulu-Natal Province of South Africa.