Christians are by far the world’s largest religious group who are also geographically widespread – so far-flung, in fact, that no single country or region can indisputably claim to be the center of global Christianity. They form a majority of the population in 158 countries and territories, about two-thirds of all the countries and territories in the world. About 90% of Christians live in countries where they are in the majority; only about 10% of them worldwide live as minorities. It is estimated that nearly 2.18 billion catholic population are spread over 200 countries around the world, accounted for nearly a third of the estimated 2010 global population of 6.9 billion.

The number of Christians around the world has nearly quadrupled in the last 100 years, from about 600 million in 1910 to more than 2 billion in 2010. However Christianity’s share of the world’s population remained almost same since the world’s population increased proportionally. Although Europe and the Americas still are home to a majority of the world’s Christians (63%). Today, countries with highest population of catholic are American where 37% adherents are residing. while, only about a quarter of them live in Europe (26%). About one in every four Christians lives in sub-Saharan Africa (24%), and about one-in-eight is found in Asia and the Pacific (13%).

Almost half (48%) of all Christians live in the 10 countries with the largest number of Christians. The three countries with their highest populations – the United States, Brazil and Mexico – are in the Americas. Together, these three countries alone account for nearly one in every four Christians in the world (24%). Two are in Europe (Russia and Germany), two are in the Asia-Pacific region (the Philippines and China), and three are in sub-Saharan Africa (Nigeria, Democratic Republic of the Congo and Ethiopia), reflecting Christianity’s global reach. Brazil has world’s highest population of Christians, having more than twice as many Catholics as Italy. Listed below are ten countries with the largest number of Christians. 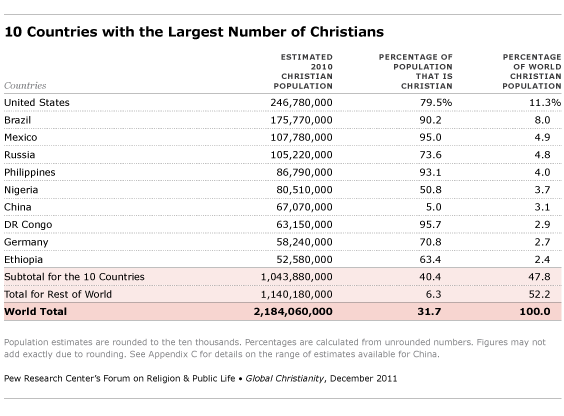